Home / Uncategorized / The Hunter and the Dove 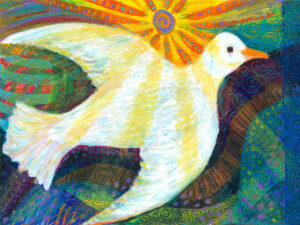 Deep in the forests of India there once lived a fierce hunter. Tawny skinned, with blood red eyes, he was like death personified to all animals. With his nets, knives and traps, he stalked among the trees carrying out his terrible business. He took pleasure from killing animals, even when he did not want them for food. Seeing him to be cruel and heartless, all his friends and relatives had shunned him, and he lived alone in a small hut. He survived on wild berries, fruits, and the meat of the birds and animals he slaughtered.

One day as he was setting his traps, a great storm blew up. Torrential rain fell and the earth quickly became flooded. The hunter could hardly keep his footing and he fell about, catching hold of hanging creepers as he struggled to stay upright. Trembling with cold, he pulled himself along as the blinding rain lashed into him. Fear seized his heart and he stumbled forward, hoping to find some high ground where he might be safe.

The force of the raging wind dashed many poor birds against the trees, and they fell stunned or lifeless to the ground. As the hunter scrambled up an incline he happened to see a pigeon lying unconscious in front of him. Without hesitation he scooped it up in his hands and put it in a bag that was tied to his belt.

"That's dinner taken care of, if I ever survive this storm," he said to himself.

The storm showed no sign of abating and the hunter clung onto to a sapling, looking around for some shelter. Not far in the distance, through the sheets of rain, he could make out the shape of a very large tree. Bending forward against the wind, he managed to struggle toward it. He saw that it was a great banyan tree that spread out a canopy for hundreds of feet in all directions. Beneath its branches it was dry and sheltered and the hunter flopped gratefully to the ground. He folded his hands and prayed, “Lord of the forest, mighty tree, please give me shelter."

Surely the Creator himself placed this tree here for the refuge of all living beings, he thought, as he leaned against its massive trunk. Night fell and in time the storm began to die out. Gradually the clouds dispersed and a star-spangled sky was revealed, looking like a dark lake filled with lilies. The hunter was far from his home and exhausted from the effort of fighting the storm. He decided to rest for the night under the tree. Pulling his wet cloth around himself, he spread out some leaves and lay down with his head on a stone. He placed the bagged bird next to him.

"You shall have to be breakfast now, " he said, and drifted into a sleep.

High up on one of the tree branches there lived a white dove with striking plumes. He and his wife had made their nest there for some years. That morning his wife had gone to fetch food and had not returned. Burning with anxiety and fearing the worst, the dove loudly lamented. "0 my wife, most beautiful bird, where are you? Have you perished in the storm? What then will be the use of my life? What of my home? Simply a house is not a home; it is the wife who makes it a home. A house without a wife is like a desert."

With tears falling from his eyes, the dove sang the praises of his wife. "That fine lady has always served me, seeking my happiness in every way. A wife is the husband's greatest treasure. There is no friend like a wife, nor any better refuge. If one has no wife at home he may as well enter the forest as a hermit."

Down on the ground, tied up in the bag, was his wife. Hearing her husband's words she flapped her wings, struggling vainly to escape. She called back, "Whether I have any merit or not, surely it is my greatest good fortune to hear my husband speak like this. A wife who does not please her husband is not a wife at all. All the gods bless a woman who satisfies her worthy husband."

The she-dove looked up through the bag to where her husband was sitting. "My lord, " she said, "I am here, but here also is a guest. He must be honoured. Take care of him, for that is the proper duty of householders. There is no greater sin than that of neglecting a needy person who arrives at your door."

The dove flapped his wings with joy when he heard his wife speak. He swooped down and alighted on a branch just above the hunter, who was beginning to stir after his night's rest. "Good sir," said the dove, "you are welcome. Surely the Lord of all beings has brought you here. As such it is my duty to look after you. Even an enemy should be shown care if he comes to one's house. The tree does not withdraw its shelter even from the man who comes to cut it down."

The dove asked how he could serve the hunter, who replied, "I am freezing. Please find some way of warming me."

"At once," said the dove, and it immediately began gathering dry leaves and twigs into a pile. It then flew to where a number of forest hermits kept a fire burning and fetched a lighted twig, which it used to set fire to the pile. As the hunter felt his circulation returning he also began to feel great hunger. "0 bird," he said in his rough and deep voice, "what food do you have?"

The dove looked down in dismay. "I have none. Doves like myself live like the sages and hermits, having only enough food to last us day by day."

Feeling distressed that he could not do his sacred duty as a householder; the dove wracked his brain for some solution. He looked at his trapped wife, who said to him, "Dear husband, you know what you must do now."

The dove nodded. He reached a firm conclusion in his mind. Looking at the hunter, he said, "Wait one moment, I will without doubt satisfy you."

The bird recalled how he had heard the sages speak about the great benefit to be had from serving guests. "They are like God himself coming to your door, " the sages had said. "Never neglect them in any way."

Thinking like this, the dove flew around the fire three times to offer respects to the fire-god, and he then threw himself into the flames. "Take my flesh, " he said to the hunter, and gave up his life.

Seeing this, the hunter was moved beyond words. He stared in amazement at the dying dove on the burning embers. For the first time in his life he felt compassion. "What am I like?" he said, tears flooding his eyes. "All my life I have acted in the most terrible way. What good is there in me? This noble pigeon is far greater than me. He has taught me a great lesson. Never again shall I kill helpless creatures."

He at once threw away all his nets and traps. "My life as a hunter is over, " he said, and he carefully released the she-dove. He then set off toward the northern mountains, intent on leading a life of meditation and prayer.

The she-dove grieved piteously for her dead husband. "Now my life has become useless, " she cried. "How can a woman live without her husband? What other duty do I have than to follow him?"

With these words she too threw herself onto the fire. As she died and left her body, she saw her husband in a divine form, rising up toward heaven. "Beloved wife, come with me now," he said. Taking her place by his side, she rose up to the skies, surrounded by celestial beings.