It isn’t always easy to see the funny side of things. Often I find it happens in retrospect. Recently I set off for a trip to that fabled land of chocolate and respected home of the European Union, Belgium. After loading up my trusty Satnav with the appropriate maps, I struck out by road. All went well until I approached my destination and it became apparent that the old satnav was struggling. It had taken me far out into the snow swept wilds of the Ardennes and as I peered

One of my favourite quotes is from the business mentor Stephen Covey, who said that the main thing is to keep the main thing the main thing. In other words, don’t lose your focus. To achieve that of course, I need to have a clear aim in life on which to focus. For many years I grappled with that, not being altogether clear what I was trying to achieve beyond survival and hopefully a bit of fun now and again. Finding myself struggling on both counts I eventually consulted

Deep in the forests of India there once lived a fierce hunter. Tawny skinned, with blood red eyes, he was like death personified to all animals. With his nets, knives and traps, he stalked among the trees carrying out his terrible business. He took pleasure from killing animals, even when he did not want them for food. Seeing him to be cruel and heartless, all his friends and relatives had shunned him, and he lived alone in a small hut. He survived on wild berries, fruits, and the meat of

In its most recent survey on the subject of God, the National Centre for Social Research found that some ninety percent of us claim to be believers.  One in five even said they had no doubts about God’s existence. Such statistics are perhaps surprising, given that education today tends to steer us toward more atheistic notions such as the’ Big Bang’ and evolution. Surprising also in the face of the widely touted suggestion that religion is the cause of most conflicts, a suggestion seemingly reinforced by the ferocity of some

How to really be happy this Christmas

When we send our children to school obviously we hope that they will be taught the truth. Well, at least some of the time. It seems that painful truths may have to wait, such as the non-existence of Santa Claus. A teacher who recently made the grave error of informing children in her class that Father Christmas was not real found herself out of a job. Parents were furious. “My son came home in tears,” said one anguished mother. “I didn’t know what to say.”

We want our children to be

The first question often asked about the Bhagavad-gita is why was it spoken on a battlefield? Despite a common view that religion is a major cause of war, the general view is that the two should remain separate. Religion or spirituality should result in peace not conflict. If one’s spiritual practises bring about the bloodthirsty desire to eliminate the followers of some other faith then they must be suspect. That would surely seem to make sense.
Nevertheless the Gita did arise from a war, the great Battle of Kurukshetra. Not only 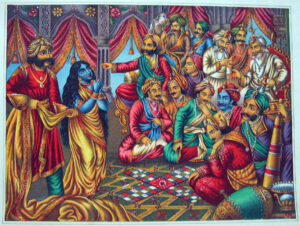 “Recognising our dependence on Krishna” 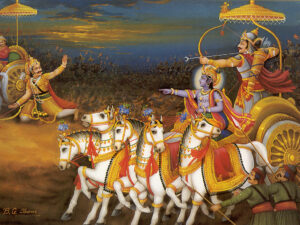 “What is true virtue?”

Here is the first of of three Mahabharata lectures delivered in New Vraja Dhama, the Hungarian farming community. 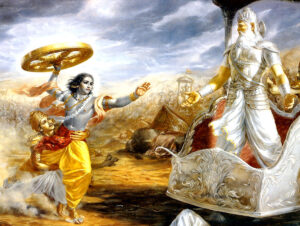 “A lesson learned from the life of Bhishmadeva”

Is this progress? (Pause for Thought)

My trip to India brought a few surprises. It’s been some years since I was last there and things are changing fast. The cities are still the same bustling mess of teeming madness, much like anywhere else I suppose, but it’s in the outlying rural areas that I was most shocked. In my many visits to India I’ve always headed straight for a small village called Vrindavan, the most sacred place for Hindus where Krishna appeared some 5000 years ago. Last