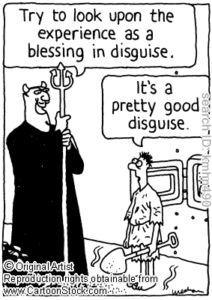 In the halcyon days of my youth I was a bit of a rock fan. As well as permanently damaging my ear drums, it has left me with a head full of various song lyrics hollered out to the strains of rapid fire guitar and pounding drums. One such line I recall was an old blues song covered by Cream, where Jack Bruce declaimed that, “If it wasn’t for bad luck I wouldn’t have no luck at all.”

For a while that became something of an anthem for me, as I went from one seeming misfortune to the next. My grand plans for world conquering success in business, finance and relationships suffered various setbacks. But then a serendipitous event of great personal significance occurred which made me re-evaluate everything else that had happened; A chance meeting with a disciple of Srila Prabhupada, founder of the Hare Krishna Movement, brought me into contact with his teachings and enabled me to view my life in a much more positive light.

It was Lord Buddha who said that everything that happens, no matter how bad it may seem, contains a blessing and our goal is to find it.  Prabhupada taught something similar when he said that we are all being moved by God, that everything is under his control, and that he is our greatest friend and well-wisher, always trying to uplift us. When I accepted that as truth I began to see things in a different way. Apparent setbacks were really just doors closing on dead ends that pushed me through different doors leading to a better places. Like a loving father with his child, I believe that the Lord is leading me away from the sweets and chocolate aisle, which look so tempting to my immature mind, towards something far more wholesome and enduring that will actually make me happy.

So now whatever happens in my life, good, bad or indifferent, I try to see God’s hand working, and look for the blessing it holds.